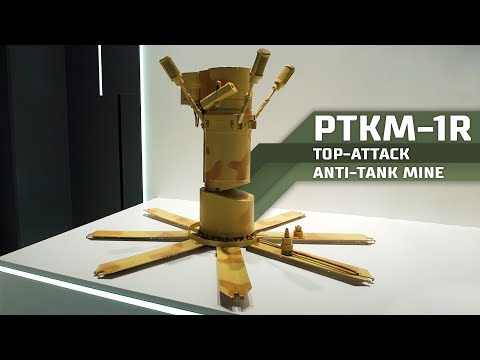 The new ammunition aims exactly at the least protected part of a tank or a self-propelled gun - its roof.


The PTKM-1R is capable of selecting what armoured vehicle to hit, it chooses only those equipment that meet the specified parameters in terms of noise and ground vibration.

It is installed manually, at a distance of 5 to 50 m from the probable route of the target making it quite difficult to detect.

When the target comes within 50 m radius from the mine, the seismic sensor commands to launch the combat element. The combat element follows a ballistic trajectory and it's sensors - thermal and radar - scan the earth's surface. When the sensors detect the target the warhead is detonated and strikes the target from above.


Main characteristics
Height of the mine, mm
510
Diameter of the combat element, mm
220
Weight of the mine, kg
19.9
Weight of explosives, kg
2.8
Armour penetration, at least, mm
70
Self-destruction time, days
1 to 10
tags: PTKM-1R, mine, ammunition, anti-tank, top-attack, smart munition,